Faces of the Survivors: David Fleitman

We met David in his apartment, his voice is filled with warmth. Even though his living situation is tough, he never complains. His story is his journey – fleeing danger, overcoming tragedy, and surviving against all odds, a story he shared with us while wearing his uniform and medals, all the while his eyes are filled with love and pride in his accomplishments.

David Fleitman was born into a Jewish family, a family of musicians in 1924, in the Jewish town of Slavuta, Khmelnytskyi, modern-day Ukraine. His father was a professional musician who studied at the music conservatory in Leipzig, Germany. When darkness invaded Europe in 1939, Soviet troops stormed into Poland, near their home and occupied the land while the war raged. 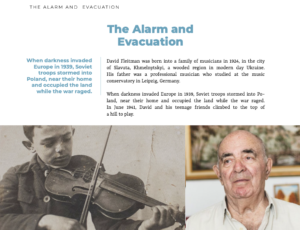 To honor these wonderful men and women, we’ve spent hours interviewing and recording their stories of the Holocaust.

Please enter your information to get our updates and a preview of Zhenya’s life-story.